Thirudan police – Thirudan Police is also known as kallan Police in many villages and cities of Tamil Nadu. There are two forms of Thirudan Police one played indoor and other outdoor. It is a wonderful game played by rural children. By playing this game children’s guessing power, face reading skill gets enhanced and they sustain the feeling of unity and oneness among the players.

The traditional game of Thirudan Police is very well-liked all over India. In many areas of Tamil Nadu, Thirudan Police is also referred to as Kallan Police. There are two good ways to play the game: One is played indoors, while the other is outside. It is a wonderful game that most children in rural areas play. This traditional game will help you improve your ability to guess and read faces, and it will keep the other players feeling like they are all in this together.

Another wonderful game that children in rural areas enjoy playing is Thief-cop. a summertime indoor game played by five children. After cutting a square of paper, writing King, Queen, Minister, Policeman, and Thief on it, folding it, and placing it on the floor, one person will choose a card. 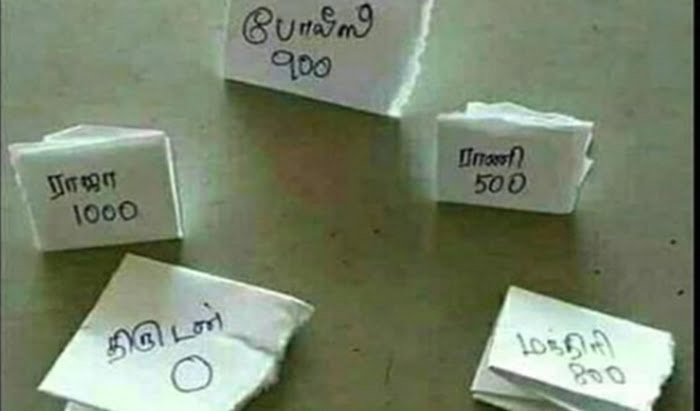 A pen, a piece of equally sized paper, and four players are all you need to play Thirudan Police or Kallan Police. The four players need to be able to move around freely if this is going to be played outside.

Bits of paper of equal size

How to Play Indoor Game?

The four players must adhere to a few straightforward steps. The four players require four equally sized pieces of paper. The characters’ names must be written down. Police, Raja, Rani, and Thirudhan—also known as a thief—are among these. On each piece of paper, these will be written. Following that, each of the four papers is folded in such a way that the text within the fold appears to be identical.

In a circle, four players must sit together. After that, one player takes the initiative and throws the hand-held stack of folded papers on the ground. After that, each player selects a paper and must secretly examine their selection. Other players shouldn’t know what other players got because the text on the four papers should be kept secret.

How to Play Outdoor Game?

This is also a straightforward game in which players divide into two groups: one group will be POLICE, and the other will be THIRUDAN (Thief). As we play Hide and Seek, the thief group will cause trouble or steal a toy and hide it, while the thirudan group will hide and the police group will search them. It is analogous to the real-world concepts of thief and police.